And . . . I’m back! It’s felt like forever since I blogged on AEOS, and I’m happy to be back after a very rough month. How’s everyone been? I’ve been able to check out posts by several of you when I’ve found the time. Bear with me as I get my footing again these next couple weeks. Originally when I set out to blog regularly, I didn’t take into account how difficult it would be to post that regularly with my current schedule. This time around, I plan to post 2-3 posts/week. If I ever reel more than that out, then I will just count myself lucky 🙂 OK, let’s get on with it already . . .

The most recent film I have watched has been rookie director Rupert Sanders’s Snow White and the Huntsman. Expectations were flying high with all the marketing and comparisons to that of the inferior Mirror, Mirror, the other of two takes on the fairytale classic. What can I say? I felt let down. A below average rating on Rotten Tomatoes (46%)  confirmed that this Snow White fell short of the mark, despite having some positive aspects to it.

There probably isn’t a better way to describe the film than that is was all over the place. The tone, the score, the characters . . . everything was constantly shifting, lacking an overall center to bring the film together as a whole. There was an imbalance that made the film fall flat. The actors did the best they could to show heart and express emotion, but I didn’t really care because they were under-developed. The script really dragged the story down, not giving the actors much to work with in the beginning, using recycled plot devices to carry the story through.

What came as a big disappointment to me was the score. I normally dig the work of James Newton Howard, even when I don’t care for the movie he scored for. But in this case, the score was all over the place, reflecting the movie’s primary issue. 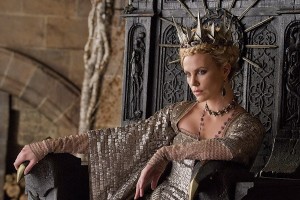 Charlize Theron is one impressive character actor. She seems to know exactly how to play your average, everyday gal, as well as an evil queen desperate to retain her beauty. The make-up transformations were stellar, showing the effects of her aging. Theron embodied the necessary evil to play this creepy character.

Then you have an actor like Chris Hemsworth, who is still establishing himself, having only been in a few films and being known primarily for another character, Thor. I thought Hemsworth did a pretty good job. Although he was never known as anything more than “Huntman” and rocked an accent that made it difficult to detect what he was saying in parts, he did what he could with what he had to work with. Hemsworth lacks no heart or emotion in expressing himself, and that came through in his Huntsman performance.

As for Kristen Stewart . . . given my high dislike for the Twilight series and her association with it, it makes it difficult to judge her without making some kind of comparison. Unfortunately, she probably won’t be able to ever separate herself fully from the films. But putting that aside (as much as is possible!), I found myself impressed with the physicality of her role. Although a stunt person probably filled in for a lot of the hard parts, I can imagine the role was physically difficult for her, whether she was riding a horse, fighting, swimming, jumping off a cliff, or sliding into a sewer. As for the acting? There was a deafness to her performance. I really felt like she tried, but ultimately failed in giving a great performance. Perhaps with more opportunities she will be able to slowly slip away from her Twilight association and move into roles with more depth. That being said, I think Stewart wasn’t terrible. And that’s an improvement.

I couldn’t help but feel like Stewart was channeling Aragorn from Lord of the Rings during the second half of the film. Rallying the troops, leading the Duke and people into battle (without proper head gear, no less), and being crowned queen in the end. I was ready for her to look at the dwarves and say “You bow to no one.” 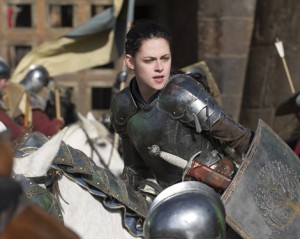 There were other moments when I felt like I was watching a rip-off version of Lord of the Rings or Harry Potter, but perhaps so many films borrow and share themes, that it was difficult to not have those thoughts while watching. When Snow White and crew came riding in on the beach, I felt like the they were attempting to breech Helm’s Deep. The relationship between Snow White and the Queen made me think of Harry Potter and Voldemort. My sister did not appreciate my continuous commentary on such comparison during the film. I digress.

The visuals were the savior of the film. Both the visual and special effects were stunning. The queen’s aging, the mirror, the scene in the fairy world–all were captivating to watch. One scene in particular that I appreciated was when the Queen tricked Snow White by channeling the Duke’s son. It was the first and only time I found myself surprised the entire film. I already knew Snow White would somehow kill the Queen by blocking with one arm and stabbing her with the other until her soul left. Too bad. I wasn’t even trying to call plot points.

Aside from the visual prowess, the film was average at best. I credit screenwriters Evan Daugherty and John Lee Hancock for dragging down the already sinking ship.

What did you think of the film? What parts did you like, and which ones could have been better?