Just three days ago, I was watching an episode of Arrested Development (2003), where Tobias (David Cross) decided to dress up as “Mrs. Featherbottom” to get closer to his daughter. It was his version of Mrs. Doubtfire (1993), a movie that has become a classic, a character that has become a household name for the past 20 years (can you believe it’s 21 years old?!).

I always thought he was entertaining. He was one of those comedians who established what was really funny, and early on, Williams represented hilarity in the movies to me. I won’t pretend to be his biggest fan, but I did have a lot of respect for Williams as an actor, and I appreciated his humor, warmth, and dramatic skills that he brought to many of his characters. He was exceedingly talented, and he brightened many of my childhood evenings with fun and laughter, voicing or starring in some of the best ’90s hits.

Perhaps my favorite role of Williams was in Good Will Hunting (1997), one of his first films I saw where he wasn’t funny. Here is my favorite line of his, and probably his most well known line, from that film:

Sean: So if I asked you about art, you’d probably give me the skinny on every art book ever written. Michelangelo, you know a lot about him. Life’s work, political aspirations, him and the pope, sexual orientations, the whole works, right? But I’ll bet you can’t tell me what it smells like in the Sistine Chapel. You’ve never actually stood there and looked up at that beautiful ceiling; seen that. If I ask you about women, you’d probably give me a syllabus about your personal favorites. You may have even been laid a few times. But you can’t tell me what it feels like to wake up next to a woman and feel truly happy. You’re a tough kid. And I’d ask you about war, you’d probably throw Shakespeare at me, right, “once more unto the breach dear friends.” But you’ve never been near one. You’ve never held your best friend’s head in your lap, watch him gasp his last breath looking to you for help. I’d ask you about love, you’d probably quote me a sonnet. But you’ve never looked at a woman and been totally vulnerable. Known someone that could level you with her eyes, feeling like God put an angel on earth just for you. Who could rescue you from the depths of hell. And you wouldn’t know what it’s like to be her angel, to have that love for her, be there forever, through anything, through cancer. And you wouldn’t know about sleeping sitting up in the hospital room for two months, holding her hand, because the doctors could see in your eyes, that the terms “visiting hours” don’t apply to you. You don’t know about real loss, ’cause it only occurs when you’ve loved something more than you love yourself. And I doubt you’ve ever dared to love anybody that much. And look at you . . . I don’t see an intelligent, confident man . . . I see a cocky, scared s***less kid. But you’re a genius, Will. No one denies that. No one could possibly understand the depths of you. But you presume to know everything about me because you saw a painting of mine, and you ripped my f****** life apart. You’re an orphan, right? 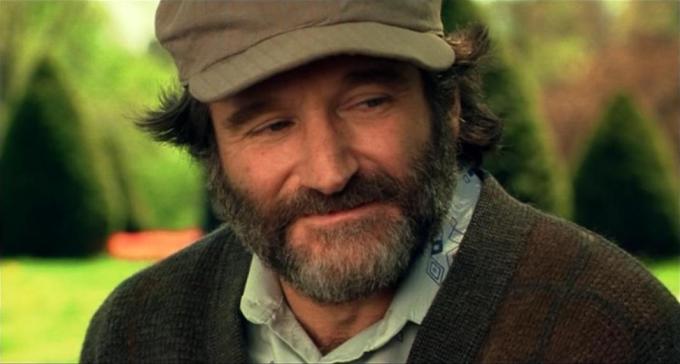 Sean: You think I know the first thing about how hard your life has been, how you feel, who you are, because I read Oliver Twist? Does that encapsulate you? Personally . . . I don’t give a s*** about all that, because you know what, I can’t learn anything from you, I can’t read in some f****** book. Unless you want to talk about you, who you are. Then I’m fascinated. I’m in. But you don’t want to do that do you sport? You’re terrified of what you might say. Your move, chief.

RIP Robin Williams, an acting legend who will live on in the movies and in the hearts of family, friends, and fans. Keep an eye out for him in theaters for when Merry Friggin’ Christmas (2014), Night at the Museum: Secret of the Tomb (2014), and Absolutely Anything (2015) are released.

I was very moved to see the tweet from the Academy of Motion Picture Arts and Sciences trending . . .

What was your favorite Robin Williams’s role?

Thinking about who my favorite actresses are as opposed to who my favorite actors are was a very different process. Since I’m more established with which actors’ performances I value and enjoy the most, as well as the films that star said actors (more so than actresses in general), I have a VERY different list of actresses on my list. By no means am I claiming these are the best actresses, but for me personally, they happen to be favorites of mine. 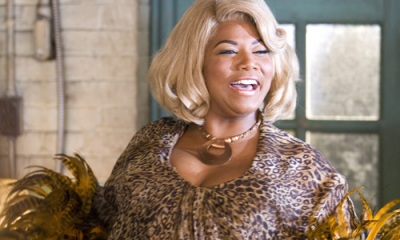 This list was actually so hard for me to compile, that I had to include a sixth entry. It was impossible for me to leave Queen Latifah off this list. She’s put in some hilarious and enjoyable supporting performances in Stranger Than Fiction, What Happens in Vegas, The Dilemma, Valentine’s Day, and Mad Money, while lending her voice to film-adapted musicals like Hairspray and Chicago, and occasionally starring in her own films, such as Just Wright and The Last Holiday. Although I don’t care for some of the films she’s been in, I typically appreciate Latifah’s role because she’s very good at playing character and supporting roles. Queen Latifah exudes confidence, and I’m always impressed with the depth and capacity she has to be either humorous, dramatic, or serious.

Kirsten Dunst was a tough one to put on the list because I’ve seen only some of her work. I’ve yet to see her talked-about performance in Melancholia, but I can say that I grew up watching her in Interview with the Vampire, Jumanji, Little Women, Bring It On, The Virgin Suicides, and Tower of Terror. I think she has a very different look and air about her that seems to separate her from the masses. I didn’t much care for her portrayal of Mary-Jane Watson in the Spiderman series although I think a lot of it has to do with how her role was written. She’s played several parts that have shown off her range, from her role in Eternal Sunshine of the Spotless Mind to Marie Antoinette. My personal favorite role of hers is in Elizabethtown. 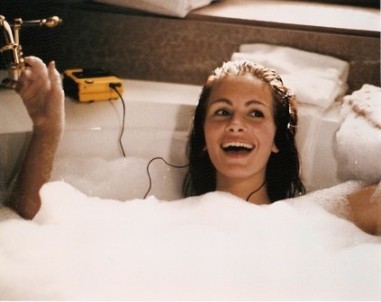 Julia Roberts is one of those actresses who played iconic roles in her time and really established herself. My like for her really goes back to my like of almost all the actors I put on my favorites list in my previous post. I think she’s this timeless actress, almost elevated above many who have tried to do what she has. Roberts really had a way of defining a leading lady in the romcoms of the 90s. For me, she makes this list because I’ve seen several of her films, and I’ve really enjoyed watching her on screen. I think some actresses are easier to enjoy watching than others. My favorite film of hers is somewhere between My Best Friend’s Wedding and Notting Hill, although Pretty Woman comes in at a close third. 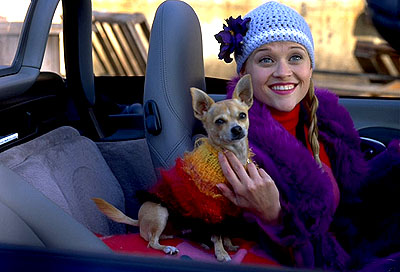 The first film I saw Reese Witherspoon in was Legally Blonde, and I knew from there on out that I was going to like her. Although she’s dabbled in some flimsier films from time to time, she’s quite strong in both comedy and drama, and I think she’s excellent at showing vulnerability on screen. Her portrayal of June Carter in Walk the Line is one of her best performances, and she has an Academy Award to show off for it. I will admit that I haven’t seen several of her films, but from the ones I have seen, I typically enjoy watching her in, although How Do You Know is a gross exception. I’m excited to see her take on some new projects and hope she continues to make smart choices. 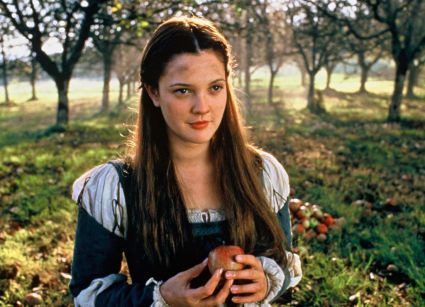 Saturday Night Live has accurately made fun of Drew Barrymore, and it’s almost understandable given Barrymore’s unusual voice or accent. One of the movies I watched over and over again as a kid was Ever After, a loose take on Cinderella. Barrymore certainly isn’t the prettiest girl who could play a Cinderella-like character, but she was every bit believable as a Danielle who fell in love with a prince. I much enjoyed her 90s through early 2000s films, especially The Wedding Singer and Never Been Kissed. What I enjoy most about her is that she’s comes across very human and relatable in her performances, at least the films in which I’ve seen her in. I definitely think she has a different look (and obviously sound) to her, but at the end of the day she’s really just this funny person who enjoys acting.

I almost want to smack myself for choosing Emma Stone because she’s only 24 years old with what now appears to be a long career ahead of her. I’ve seen almost all of her movies and I will readily admit that if she’s in a movie, I would probably go just for the sake of seeing her. It really wasn’t Easy A that made me totally dig Emma Stone, even though I thought she was pretty awesome in that (also, that’s the kind of teen comedy I can deal with today). I think she’s absolutely hilarious and not afraid to do some silly things on screen, even if she might look stupid. Stone is easily my favorite character in The House Bunny, a rather pointless fluff movie, but entertaining nonetheless with Stone trying to “attract” guys by spraying herself with a hose. She played the “it” girl in Zombieland and the annoying, weird girl in Ghosts of Girlfriends Past (you caught her in that, right?). The year 2011 really skyrocketed Stone’s career (and name) when she starred in two big hitting films, Crazy, Stupid, Love and The Help. I can imagine Emma Stone becoming the Julia Roberts or maybe more so, the Sandra Bullock, of her time as she ages and takes on more roles.

OK, it’s your turn. Who are your favorite actresses? Does my list sound as crazy to you as it does in my head? Don’t answer that.