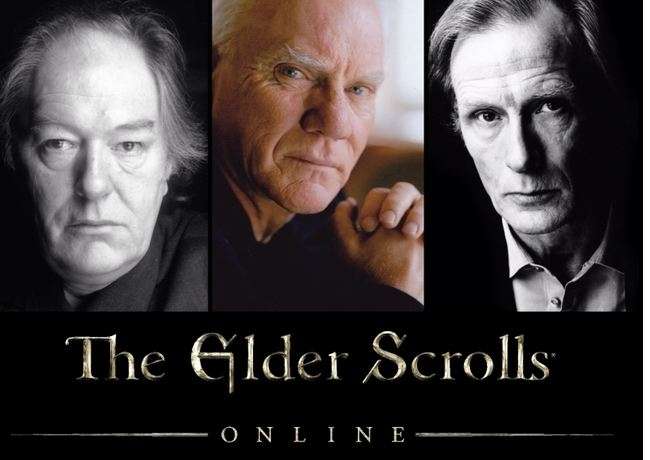 Just recently, Kristin came walking into the room while I was playing the latest iteration in the Elder Scrolls franchise, Elder Scrolls Online (2014). After watching for a couple seconds, she shouted out “that’s Michael Gambon!” in somewhat bewildered disbelief. Sure enough, the aged character with a staff in Elder Scrolls Online was voiced by Dumbledore himself, Michael Gambon. In a marketing ploy to ultimately bring more dollars in, Zenimax Studios hired several well-known screen actors to voice characters inside the video game, including Michael Gambon, Bill Nighy, Kate Beckinsale, Alfred Molina, Malcolm McDowell, and John Cleese. This isn’t the first time an Elder Scrolls game has brought in talent from the big screen: The Elder Scrolls IV: Oblivion (2006) had Sir Patrick Stewart, Sean Bean, and Terrence Stamp while The Elder Scrolls V: Skyrim (2011) utilized Christopher Plummer and Max von Sydow’s talents. The publisher itself, Bethesda Softworks, has been known to tap screen talent for its games, bringing in Liam Neeson for Fallout 3 (2008) and Ron Perlman as a narrator for the Fallout series’ marketing materials.

Check out this fun video featuring interviews with the cast of Elder Scrolls Online:

Why are video game publishers trying to bring in big name movie actors? Is it truly because of talent, or just to bring in more money so they can develop the next installment in the series? Popular consensus seems to suggest that studios should leave the voice acting to the voice talent and leave the screen acting to the screen talent and any crossover is just a money-grabbing scheme by big corporations.

Let me submit that perhaps being a good screen actor and being a good voice actor are not mutually exclusive. Many film and TV actors have found success from lending their voice to a video game character. My opinion is that there is a pool of acting talent out there from which films, TV shows, and video games all draw. One video game character that I find to be pretty cool is Morrigan from Dragon Age: Origins (2009) and Inquisition (2014), who is voiced by Claudia Black, an actress who gained recognition from acting in the sci-fi TV shows Farscape (1999-2003; which I still haven’t been able to bring myself to watch) and Stargate SG-1 (1997-2007). Yvonne Strahovski, who came to prominence as Sarah in Chuck (2007-2012), starred as a main character in the video game Mass Effect 2 (2010), won a Saturn Award for her guest work on Dexter (2006-2013), and most recently, starred alongside Keifer Sutherland on 24: Live Another Day (2014).

Yvonne Strahovski and her character Miranda Lawson in Mass Effect 2

Perhaps in today’s age of interconnected everything, actors at their core transcend just the screen- or voice-talent stereotype. Maybe acting now consists of being more than just a pretty face for the big screen. One of the more brilliant actors I know of, Benedict Cumberbatch, has an extensive resume that covers film, TV, theatre, radio, and video games. Now more than ever before, I believe actors are breaking out of the traditional boxes created for them and showcasing their talent in a variety of ways.

So while I do agree that a lot of big-name hires are done just for attention, I think it does some good as well in breaking down traditional lines drawn for types of media. A future of overlapping and intertwined media is inevitable, so why not start now?

It’s your turn now. Have you noticed any actors’ voices from video games? Do you have any favorite video games that feature big screen actors’ voices? Please join the discussion below, because I would love to know your thoughts!

12 thoughts on “Movies and Video Games: A Crossover of Actors and Voicework Talent”