To my own surprise, I didn’t find Oscar winners Trent Reznor and Atticus Ross’s The Girl with the Dragon Tattoo score as interesting as their award-winning score that accompanied 2010’s The Social Network. I felt let down by the second installment of Sherlock Holmes in part due to Hans Zimmer’s lacking, all-over-the-place score. I was especially underwhelmed with Cameron Crowe’s decision to feature only Jonsi on the We Bought a Zoo soundtrack.

With those disappointments in mind, I still found three scores surprisingly well-fit for the movies they served.

While director Brad Bird was a newbie to live-action film directing until the latest installment in the Mission Impossible franchise, he took with him music composer and collaborator Michael Giacchino, who is known more for his stellar work on animated films such as his Oscar-winning score Up, or Cars 2. Giacchino isn’t a stranger to composing for live-action film, however. His work extends not only to film, but also to the popular show Lost. One of my favorite Giacchino’s scores is the latest Star Trek reboot.

Giacchino did a nice job of subtly blending the well-known Mission Impossible theme while creating new themes for the locations the IMF team traveled, such as the track titled “A man, a plan, a code, Dubai.” The fast-paced, entertaining soundtrack well complemented the adrenaline-pumping film. 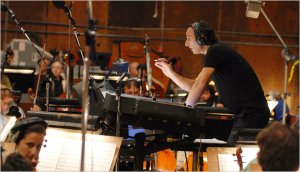 You don’t need to be a fan of Harry Potter to be a fan of this exciting, beautifully composed score. Well-set theme tracks for certain characters to a gorgeous, sweeping end theme accompanying the epilogue, The King’s Speech composer Desplat pulled out all the stops to deliver one of the better scores for the Harry Potter franchise. With the likes of John Williams (composed for the first 2 films), Patrick Doyle, and Nicholas Hooper to follow, Desplat was given probably an easier opportunity to compose when he was writing for the epic finale in the series. Nonetheless, I applaud him for making one of the more listenable soundtracks that entertains in its entirety, unlike some of its predecessors.

X-Men: First Class introduced me to Henry Jackman, who I had never heard of before seeing the film. While I was seeing the film, I couldn’t help but wonder who had composed it, because it was unlike anything I had ever heard before. Suitably entertaining, powerful, and emotional, Jackman’s score lends the needed feeling to both the action scenes and the more emotionally-focused moments. He retains a similar theme throughout the entire soundtrack, making it memorable in viewer’s heads. This was easily my favorite score from 2011.

Even one of the trailers for Tinker Tailor Soldier Spy featured the track “Frankenstein’s Monster,” from the score:

Ludovic Bource’s score for The Artist

What film scores from 2011 were you a fan of? Did you like any of the ones I didn’t?